Rapid launches Low Built Base granulators for sheet and film

Bredaryd, Sweden - October 13, 2015 - Size reduction equipment specialist Rapid has launched the LBB 300 series, a granulator with a very low height for handling sheet and film scrap. The new unit (LBB stands for Low Built Base) is intended principally for use in-line with a thermoforming unit, where its very low height allows it to be located directly under the output conveyor, saving valuable floor space.

The LBB 300 series, which appeared in prototype form at K 2013 in Düsseldorf two years ago, made its official commercial debut at the Fakuma show in Friedrichshafen, Germany, on October 13-17. It is available worldwide.

Height of the LBB 300 series is just 600 mm (excluding feeder) and it is available in three widths: 900, 1200 and 1500 mm. The unit can be equipped with a rollfeed unit synchronized to the thermoforming line speed, or with a simple tray that collects skeletal frames as they fall from the line.

The modular granulator can also be configured to fit directly under a shredder to provide final size reduction, without the need for the conveyor belt used in common practice for connecting the two units. Rapid offers the LBB granulator in versions with various types of rotors and hoppers, depending on the application.

The very compact design of the LBB 300 series means that it takes up very little extra space on the production floor. Depending on model, width is between 2000 and 2300 mm, and depth is 700 mm. It is designed to handle film and sheet up to 8 mm thickness, depending on material.

”We are really delighted with our latest addition to the extensive Rapid range of granulator solutions,” says Bengt Rimark, Sales and Marketing Director at Rapid. “The new LBB 300 series represents what we are all about at Rapid - innovative, flexible and highly-efficient space and cost beneficial granulator systems that meet our customers’ needs.”

The LBB 300 series uses a true scissors cutting action to provide clean and precise cutting of sheet and film, and high quality regrind. The rotor on all models is 300 mm in diameter, fitted with six, eight or ten blades depending on model size. The two smaller units have six fixed knives, while the largest has nine. Units can be fitted with motors rated at between 7.5 and 30 kW. Maximum throughput capacities range from 800 to 1200 kg/h. Output can be transported via a vacuum conveyor straight back to the production line for reprocessing.

All units are fitted with a rotor stand-still guard for operator safety. The two larger units both feature split screens and split screen boxes for extra ease of service and maintenance. The equipment is mounted on a solid stand with castors for ease of movement when required. Basic units weigh between 1200 and 1500 kg, depending on size.

Rapid Granulator, founded 1942 with headquarter in Bredaryd, Sweden, exports around 97 percent of its production. Supporting its sales operations and global customer base the company has six subsidiaries located in: Cranberry Township (PA), USA; Shanghai, China; Singapore; Venice, Italy; Lyon, France and Kleinostheim, Germany. Further support is provided by a global network of over 90 agents and local partners.

More than 100,000 machines/systems installed across five continents, for granulation of plastic scrap and the recycling of post-consumer and post-industrial waste, confirm the company as a world-class leader in its field.

Rapid is part of LIFCO AB, a group of more than 100 companies in 28 counties. More about Lifco at www.lifco.se. 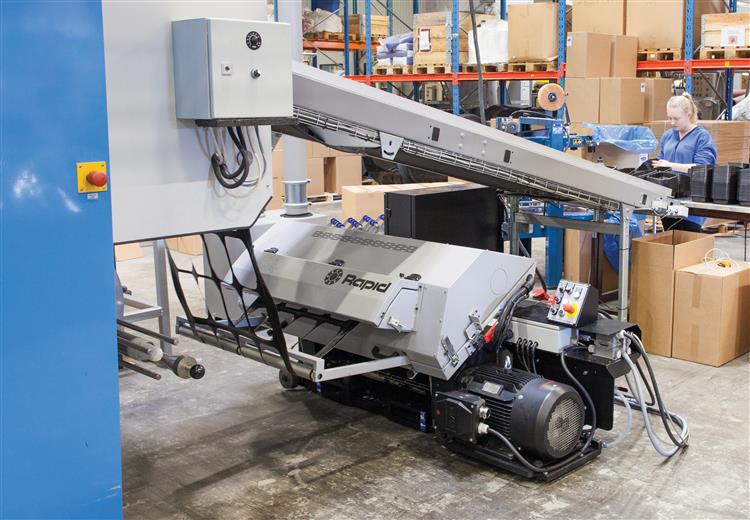