Paris, France, August 25, 2021 – CoorsTek, a leading global manufacturer of technical ceramics, announced the decision of the EU Trademark Court of Appeals in Paris to uphold the previous Paris EU Trademark High Court ruling in favor of the company’s ability to manufacture and market their CeraSurf®-p “pink” implantable ceramic hip components. This decision is the latest ruling against CeramTec GmbH in the lawsuit originally filed in 2013 by CeramTec, claiming the development and marketing of CeraSurf®-p by CoorsTek for orthopaedic applications was in direct violation of CeramTec’s invalidated European Union trademark registrations for pink colored ceramic hip components.

“CoorsTek is extremely pleased with the latest decision by the EU Trademark Court of Appeals,” said Jonathan Coors, CEO of CoorsTek. “Competition drives innovation, and patients deserve access to the best possible options for their healthcare. Our ability to manufacture and market our state-of-the-art material will progressively drive future advancements in orthopaedic surgery.”

In the June 2021 decision, the Paris Court of Appeals upheld the cancelations of the three EU trademarks and the dismissal of CeramTec’s trademark infringement and parasitic competition claims against CoorsTek. The Court confirmed the trademarks were filed in bad faith and additionally ordered CeramTec to pay damages for abuse of trademark law.

This decision followed the February 2018 ruling in which the Paris EU Trademark High Court ruled Ceramtec’s European Union trademark registrations related to the color pink as applied to ceramic implants were invalid and unenforceable throughout the EU. Among other decisions, the ruling canceled CeramTec’s three EU trademarks, dismissed CeramTec’s claim for trademark infringement in France against CoorsTek for its CeraSurf®-p ceramic hip components, and found that CeramTec’s filings for trademarks in pink were made in bad faith. Read more on the 2018 decision.

Over 40,000 CoorsTek CeraSurf®-p ceramic femoral heads and liners have been sold for clinical use as bearing surfaces for hip implant systems. CeraSurf®-p hip components were cleared for regulatory use in Brazil in 2011(ANVISA), in Europe in 2012 (CE Mark), and received FDA 510(k) clearance in the U.S. in 2016.

CoorsTek is a privately-held leading global supplier of technical ceramics, serving a wide array of industries and markets – with the vision of making the world measurably better. The company is headquartered in Golden, Colorado, with ~6000 employees worldwide. CoorsTek continues to make significant investments in developing advanced materials and processes for critical applications and is the partner of choice for companies worldwide, whose success requires the unique, high-performance properties of products manufactured from engineered ceramics and advanced materials. The company is committed to delivering outstanding value through operational excellence, research, development, and manufacturing capabilities and collaborative stakeholder relationships. To learn more about our products and services please visit our website. 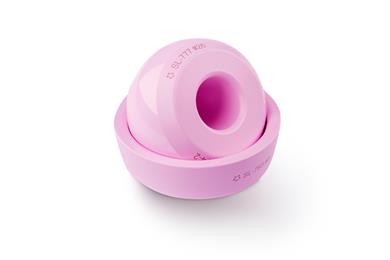