Muttenz, September 18, 2017 – Clariant, a world leader in specialty chemicals, and Enviral, the largest producer of bioethanol in Slovakia, today announced that they have signed a license agreement on sunliquid® cellulosic ethanol technology.

Enviral has acquired a license to use Clariant’s sunliquid technology as part of its goal to realize a full scale commercial cellulosic ethanol plant for the commercial production of cellulosic ethanol from agricultural residues. This new plant will be owned and operated by Enviral and is planned to be integrated into the existing facilities at Enviral’s Leopoldov site in Slovakia with an annual production capacity of 50,000 tons (50.000 tons = 16.7 million gallons = 63.4 million litres). It will use Clariant’s sunliquid technology as well as starter cultures from its proprietary enzyme and yeast platforms to process Enviral feedstock into cellulosic ethanol.

Christian Kohlpaintner, Member of the Executive Committee at Clariant: "We are excited to announce this first license deal for our sunliquid technology. It marks our official entrance into the market and the successful commercialization of this highly innovative and sustainable technology. This step comes as a logical consequence 0f Clariant’s successful innovation strategy and will provide additional growth above and beyond Clariant’s current strong portfolio. Cellulosic ethanol has significant potential for reducing greenhouse gas emissions and we are proud in making it a reality.”

"Thanks to the cooperation with Clariant, the Slovak plant of Enviral will be one of the first plants in Europe to start commercial production of advanced biofuel. This exceptional project is the result of intensive work, searching for optimal solutions, as well as the successful technology validation carried out in Clariant´s pre-commercial plant with biomass supplied from Slovakia. Now, thanks to the advanced technology, we can turn it into reality and help Slovakia meet the targets for advanced biofuels in the European Union," says Matej Sabol, CEO of Enviral.

Clariant and Enviral conducted extensive tests of Enviral’s feedstock with Clariant’s technology to ensure effective and efficient compatibility. These tests, conducted at Clariant’s pre-commercial sunliquid demonstration plant in Straubing (Germany), provided excellent results and formed the basis for the project decision. Next steps are detailed engineering studies before the official ground breaking which is expected at the end of 2017.

As a further step in the commercialization of sunliquid, Clariant decided to set-up a new Business Line Biofuels, as part of the Business Area Catalysis, which is responsible for further developing the biofuels business across the board and report its performance.

sunliquid® IS A TRADEMARK OF CLARIANT REGISTERED IN MANY COUNTRIES.

Clariant is a globally leading specialty chemicals company, based in Muttenz near Basel/Switzerland. On 31 December 2016 the company employed a total workforce of 17 442. In the financial year 2016, Clariant recorded sales of CHF 5.847 billion for its continuing businesses. The company reports in four business areas: Care Chemicals, Catalysis, Natural Resources, and Plastics & Coatings. Clariant’s corporate strategy is based on five pillars: focus on innovation through R&D, add value with sustainability, reposition portfolio, intensify growth, and increase profitability.

sunliquid® is an innovative biotechnological method for manufacturing cellulosic ethanol from agricultural residues such as cereal straw, corn stover or sugarcane bagasse. In the completely integrated process, highly optimized, raw material-specific biocatalysts decompose cellulose and hemicellulose in high yields with stable processing conditions into fermentable sugar. The process-integrated production of the biocatalysts offers flexibility and reduces production costs. In the next step, C5 as well as C6 sugar can be converted into ethanol with a new fermentation organism, thereby raising the ethanol yield by about 50 percent. A highly optimized purification process is instrumental in enabling all the energy required for the process to be derived from the insoluble residue lignin. The resulting cellulosic ethanol saves around 95% of CO2 emissions when compared to fossil gasoline. Since July 2012, Clariant has been operating a pre-commercial plant in Straubing, which produces up to 1,000 metric tons of cellulosic ethanol from around 4,500 metric tons of raw material every year.

ENVIRAL was established in 2004 as the first producer of bioethanol in Slovakia/Leopoldov city. Annual production capacity is 145,000 m3 of bioethanol. All of the produced bioethanol is delivered by rail, which further decreases the greenhouse gas emissions from transport. The bioethanol production is a wasteless process, minimizing electricity and natural gas consumption and enabling the bioethanol produced in ENVIRAL to reach a reduction of greenhouse gas emissions of at least 60% compared with the gasoline.

ENVIRAL is member of Envien Group, one of the largest and most significant groups of companies in the CEE region active in the production of biofuels, used in mixtures with conventional diesel and gasoline. 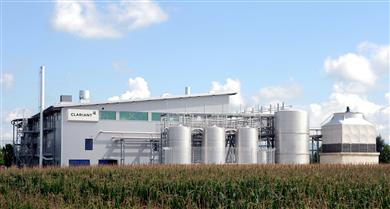